The Greatest Bat-Mite Stories Ever Told... Yup, You Read That Right. BAT-MITE 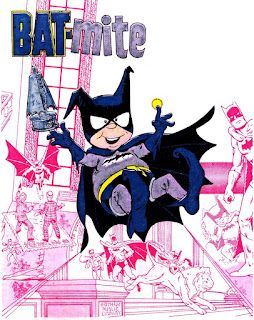 Yes, Bat-Mite. Bat-Mite is one of the most reviled characters in comics from certain corners on the comic book internet, a character some view as an embodiment of everything that was wrong with a certain era of Batman stories. For those of you unfamiliar with Bat-Mite, he was introduced in Detective Comics #267, at the end of the 50s and in the height of Batman's crazy sci-fi period. An imp from another dimension, he was Batman's self-described number one fan, and if you've ever seen Misery, you know it's never good when someone says they're your number one fan. Basically, he was to Batman what Mr. Mxyzptlk was to Superman, only with less malice and more fan worship; he always tried to help Batman, but wound up getting in the way far more often than he helped. He was goofy, and the stories that surrounded him were just as goofy.

But after the 50s and early 60s, Bat-Mite vanished for quite some time, as opposed to Mxyzptlk, who continued to appear continually. I think Mxyzptlk did better in fan's eyes for a couple reasons. Superman, while made tonally less crazy than those 50s stories, Superman's stories were always lighter, so Mxy would work better. Also, Mxy was never brought in as a sidekick, as Bat-Mite was on the ill-conceived 1977 New Adventures of Batman, where Bat-Mite appeared every episode like the Great Gazoo in the room. And if O'Neil & Adams didn't kill the silliness that let Bat-Mite exist, Frank Miller and the Post-Crisis DCU certainly did.

But recent years have been kinder to Bat-Mite. A more accepting comic book audience has allowed the little guy to pop up occasionally, despite all the fans who only like their grim and gritty Batman moaning,. Grant Morrison did a service to Bat-Mite by including him in his run (more on that later). And while New Adventures of Batman nearly destroyed Bat-Mite, another animated series pretty much raised him from the dead. This coming Wednesday sees the debut of a Bat-Mite mini-series as part of the DCYou initiative, so I thought it might be fun to revisit some great Bat-Mite stories before the new series starts. 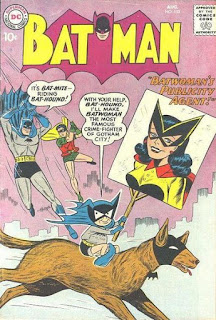 I'm not as familiar with the Silver Age Bat-Mite stories as I probably should be, but they haven't been the most reprinted Batman stories. This is a story I read somewhere, and it stuck in my head because it's just so fun. Bat-Mite decides to help Batwoman as her partner, but falls in love with her and creates hijinks to help her beat Batman to some criminals, including shrinking everyone down to tiny size. He also gets help from Ace the Bathound, another Silver Age character who has gotten a renaissance in recent years. Between Bat-Mite, the Kathy Kane Batwoman, and Ace, this might be the most Batman Family inclusive story on the early 60s, and is tremendous fun. Written by Batman co-creator Bill Finger, it has a strong pedigree behind it, and is probably the best example of Silver Age Bat-Mite. 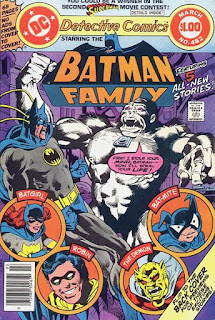 This was the first Bat-Mite story I ever read, as it was included in the late 80s Greatest Batman Stories Ever Told trade, a book I read nearly to pieces when I first started reading comics. In a very meta story before meta was a big thing in comics, Bat-Mite appears in the DC offices and demands his own feature. It's a fun story, with Bat-Mite causing all sorts of chaos. While Marvel was well known for writing and drawing the Bullpen into comics, DC used the device more sparingly, and so that, plus the fact that it was a rare late 70s/early 80s appearance of Bat-Mite and the excellent Michael Golden art, make it stand out. 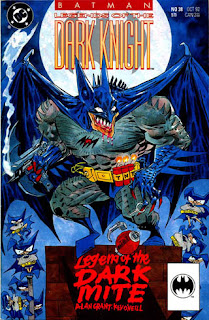 Not to be confused with the cartoon to be discussed later, this comic is technically the first post-Crisis appearance of Bat-Mite. It's not as light a story as the previous ones, but is not less trippy. Drugged out criminal Bob Overdog encounters Bat-Mite in this issue, and is brought to Bat-Mite's dimension, populated entirely by imps who play at being super-heroes. It's a twisty story, and it's not one hundred percent clear if it's real or in Overdog's head. It was followed up by a prestige format one-shot, Mitefall, that was a send up on the "Knightfall" storyline with Batman replaced by Bat-Mite, and Overdog in the Azrael roll. Not necessarily canon, but Alan Grant has a ton of fun, and Kevin O'Neill's art gives the books a truly unusual feel. 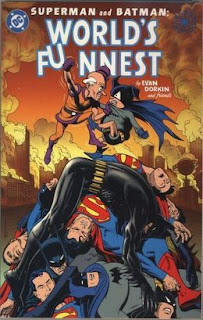 The fact that this one-shot is out of print and uncollected is a complete travesty. Not only is it so delirious, insane, and funny that every fan of DC Comics should read it, but it has one of the best collections of artists I can remember in a jam comic. While Bat-Mite and Mr. Mxyzptlk had met in the Silver Age, this modern age Elseworlds story written by Eltingville Club and Milk & Cheese mastermind Evan Dorkin takes their rivalry to a new level. Basically, Bat-Mite and Mxyzptlk rampage across the multiverse, with Mxy trying to destroy Bat-Mite, and basically destroying every world they encounter. In itself, this sounds like one of those fun concepts that would make for a decent comic, but nothing memorable. But when you add in Dorkin's biting commentary about the way comics take themselves so seriously (but still done with a love of comics as a medium), you get a truly hilarious comic. As for the art, a few of the absolute murderers row of artists include Bruce Timm drawing the DC Animated Universe, Alex Ross drawing the Kingdom Come universe, Ty Templeton on a whole myriad of worlds, and Frank Miller on the Dark Knight Returns universe, along with a group of other A-List artists hitting a bunch of other realities. It's one of the best Elseworlds ever, and true lost gem. 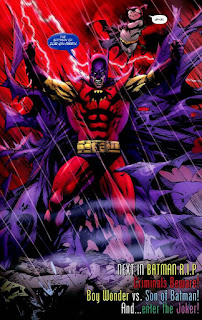 There are so many resources on-line for Grant Morrison's mind-bending and elaborate Batman run of the 2000s-10s that I haven't written a ton about it outside of reviews. But if you're unfamiliar, Grant Morrison basically said that every batman story ever happened, even those weird ones, although he re-imagined them under a more modern light. And when Batman is attacked psychologically, he begins to see Bat-Mite. It turns out this Bat-Mite is a figment of Batman's imagination, part of the programming Batman put into his own head to counter and attack like this. When Batman talks to Bat-Mite about coming from his imagination, though, Bat-Mite replies that imagination IS the fifth dimension, which is such a Morrisonian concept that it works really well in context. 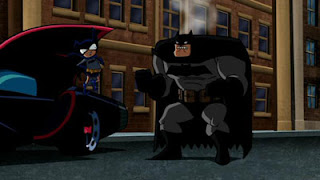 Batman: The Brave and the Bold

While these other appearances might have kept Bat-Mite alive in the consciousness and not one of the many completely forgotten characters of the Silver Age, I think his new series owes its existence to the use of the character in the animated Batman: The Brave and the Bold. Voiced to perfection by the hilarious Paul Reubens (best known as Pee-Wee Herman), this Bat-Mite is played straight as the ultimate fan boy. He's wacky, don't get me wrong, but in between his fourth wall breaking and causing of insane situations, the creators use him to make commentary on fandom in general. It works really well in the context of Batman: The Brave and the Bold, a show that mixes some modern seriousness with the zaniness of the Silver Age.

The first Bat-Mite appearance is entitled "Legends of the Dark Mite" and is basically a Bat-Mite/Batman team up. We get views of different comic book versions of Batman, we see a convention with Paul Dini and Bruce Timm in the audience, and mutant bunnies. It shows everything that is great about B:TB&TB, mixing action, comedy, a love of Batman's history, and a decent lesson (even if Bat-Mite doesn't  really take it to heart). 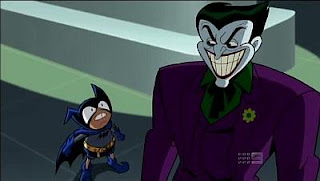 "Emperor Joker" is loosely based on the Superman story of the same title, only in this case Joker tricks Bat-Mite into giving his powers to Joker instead of Mxyzptlk. This episode features a Joker musical number, the first appearance of Joker-Mite, and the first B:TB&TB appearance of Harley Quinn, who's a black-and-white twenties era flapper in this world. The thing about this episode that impresses me is there's a real serious tone to a lot of the Batman/Joker interaction, and while Bite-Mite is still allowed to be some comic relief, the show balances that with the other plot. It's very smart writing. 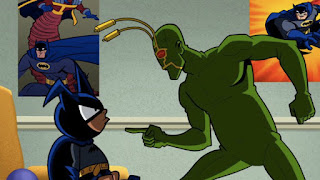 While Bat-Mite also narrates "Bat-Mite Presents: Batman's Strangest Cases" that episode doesn't really have much Bat-Mite in action. The last major appearance of Bat-Mite is, in fact, the final episode of the series, "Mitefall!" The episode features Bat-Mite, bored with the lighter toned B:TB&TB, deciding to get the show cancelled. It's so wonderfully written, filled with jokes about TV shows and comics and the ways they fail, and with Bat-Mite standing in for every fan who has ever complained about the show they once loved going downhill. Ambush Bug pops up to counter Bat-Mite, and we get a lot of fourth wall breaking. Aside from changing actors and adding little kids, classic examples of desperation moves to get viewers on TV shows that usually backfire, Bat-Mite also introduces a vehicle that is clearly created to be a toy, the Neon Talking Super Street Batluge (pictured below). And I will honestly admit, if they ever made that toy, I would buy it in a heartbeat. The episode ends with Batman breaking the fourth wall, and bidding his audience a fond farewell. It's not a Bat-Mite moment, but it's an excellent sign off to the show. 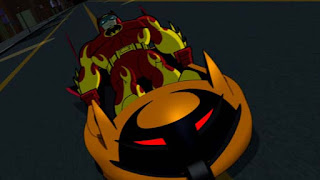 So, this Wednesday, if you're feeling like you want a comic out of DC that isn't full of doom and gloom, you might want to give Bat-Mite a try. You can check out an eight page preview here.
Posted by The Matt Signal at 10:41 AM